If you met up with someone you hadn't seen in XX years, more than 10, and they wanted you to tell them about your life, what would you say? I've had the opportunity to do this more than a few times in the last few weeks, getting caught up with the folks from my old group at home. Everyone says pretty much the same thing -- I got married in (year) to (so-and-so) and we have (more than 1) kids named (thankfully nothing too silly so far). Without exception, everyone I have reconnected with who is married or has been married has kids. It isn't even a question of whether you have them or not, just how many. Their kids range in age from 2 to 18. Remember I haven't seen some of these people in 30 years, so that shouldn't be that difficult to wrap my brain around, but it is. I'm sure its weird for them when they find out I don't have any kids, and so far nobody has been too much of an asshat. Many of them live without spitting distance of where they lived as kids, so again, I am the odd one who lives not only far away, but in another country. Especially now, Canadians are nationalistic and protective of their non-war status, which I totally respect.

But, knowing when and who you married, how many kids you have and maybe even what you do for a living doesn't tell much about who we are, does it? Perhaps I'm in a space right now where I am craving a deeper connection. I'm sure they would all think I was nuts if I started telling them how the smell of the ocean makes me cry, or the touch of a dog's paw in the middle of the night reassures me, or how my husband's voice can still make me giggle like a schoolgirl.

In other news, my usually mostly-well-behaved lesson horse Angel bit me on Saturday. HARD. I tacked her up and got on her, then decided I needed to tighten the girth one more notch, so I jumped off next to the mounting block. She didn't think the girth needed tightening, thank you, and reached around and sunk her teeth into my left outer thigh. The bruise is the size and shape of a decent sized egg, and at first you could see two half moons with a white line down the middle, the demarkation of her upper and lower teeth. Now that it's a few days' old the line is muddled and its starting to get that sickly green color under the purple. I hope it fades before we leave for the Caribbean in a month.

Finally, I called my sister the other day to wish her daughter and her husband happy birthdays and she told me she is having a partial hysterectomy next month. Needless to say this was a surprise, given that she's only 15 months older than me and I had no idea she was having any gynecological problems. Apparently she's been bleeding since January and her GP just last month finally decided to send her to see a "specialist". She lives in a very small, rural town in the interior of BC, but still -- holy shit -- this really pissed me off. She also told me that when she saw the gynecologist he didn't even do an ultrasound, just a pelvic exam and told her she has massive fibroids and recommended they take them out along with her uterus. Is it even possible to detect fibroids from a pelvic exam? There's nothing I can do about this but for once I was happy to have my US health insurance.
Posted by Donna at 8:57 PM 6 comments:

My ex-husband called me last weekend to let me know that a group of people that I marched drum corps with and that he and I taught and taught with had started a group at one of the very popular networking sites. I had never visited this site but found the group very easily, and set up an account for myself complete with photo albums. As I've mentioned here before, I started marching in this group in 1976 when I was 12 and stopped at 18, then took a year off and came back in 1984 to teach for another couple of years, so my entire teenage life was spent with these people. Some of them I hadn't heard from since the late 70s/early 80s, but there they were, right there in the magic box. Its quite jolting to see a picture of someone you knew from 30 years ago then to see a picture from today, especially if, let's say, they've let themselves go just a bit. Wow. Anyone ever been to a hairdresser? I had to really, really look hard at some of the faces to find the teenagers I knew; I'm sure some of them didn't recognize me either, but I'm hoping that's because I've aged rather well.

This photo was posted by someone else in the group, taken in 1979 -- my D is the second drummer from the right. Isn't that cute? I kept telling him that all of us were total groupies of his drum corps, this is proof. (We didn't meet until 1989.)


I don't think I need to tell you what happens when you put 100 or so 12 to 20 year-olds on buses for weeks at a time. It was such a soap opera! People switching partners, hooking up and breaking up several times over the course of a summer. In 1977 I had my first real boyfriend, he was a drummer (natch) and we were together for the entire summer. I even have a very bad picture of the two of us at the back of the bus. God, we were so young! He's a part of the group and we've been swapping stories all week, it's been very fun. The next time I go home there will definitely be a reunion.

Having said all that, looking at these old pictures is dredging up a lot of stuff. First, I see myself in all these pictures and I have absolutely no memory whatsoever of that moment. I see that it is me, and I know all the other people in the picture, but there's nothing about it in my head. I guess that's normal, although it seems like a spark should have been set off by at least one picture. Pretty much everything before the age of 17 or so is just gone. That includes most of school as well. Of course, I remember the horrible stuff, but nothing from day-to-day.

Many of you newer readers don't know my history of sexual abuse, mostly at the hands of my older brother, who was killed in a car accident in April 2005. Before my Dad kicked him out of the house for being high at the dinner table one too many times (saving me unintentionally), the abuse had been elevated to include a good friend of his, who was invited to join us several times. The last time, he raped me while my brother played lookout. This was in the summer of 1975, I was 11 and they were 18.

The following year when I joined the drum corps I could hardly believe my luck -- getting away from my family for weeks on end -- sign me up! That guy from the picture at the back of the bus was my first real experience with what was normal, and he was so sweet and nice to me. All we did was kiss and hold hands the whole summer. He helped me to begin to sort out what was appropriate and what wasn't, and I am deeply grateful. Of course, he had no idea of how damaged I was at the time, but I was very fortunate to hook up with a guy like him. And now we're friends again.

In the same vein, a close friend that I met in 1990 in a therapy group for sexual abuse survivors told me the other day that our therapist committed suicide in 2004. We're both trying to process this information. So much intense work was done there, for several years, and I credit that doctor with helping me to work through a lot. I'm not quite sure what to do with this information; it feels very odd that it happened almost exactly 3 years ago and we've just found out now. We never got the chance to go to her memorial...anyway, I'm just throwing that out there.

I apologize to my horsey readers for this post, but sometimes the dark side does raise it's head around here. It ain't called the Velvet Cage for nothing. Miss is sound and well and Willow will be getting on her this week, which means I should be riding her this coming weekend.
Posted by Donna at 7:01 PM 4 comments:

Growing up in the Vancouver BC suburbs, I was used to having four distinct seasons. The first five years in Northern California were difficult, I felt like I was living in perpetual spring and summer and my body clock felt out of whack. Now that I've been here for almost 20 years (which seems impossibly long), I've become more attuned to the more subtle changes in temperature and moisture. We live at 2600 feet above sea level but only about 10 miles from the ocean, so the weather up at the house is often very different than it is "down the hill" at sea level, and almost always different than it is "over the hill" in Silicon Valley and the rest of the Bay Area. We get snow a couple of times a year but it doesn't last, which is just fine by me. 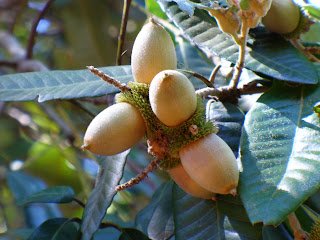 Our 2 acre property is all trees, mostly oak trees, which means one thing this time of year: acorns. Some of these trees are 200 feet tall and 8 feet across, so when it gets windy the acorns are falling from a great height, hitting the house in loud barrages that scare the dogs and sometimes even make me duck. They look positively mammillary, don't they? 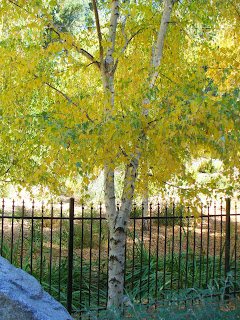 This lovely birch tree is along the dog-walking route around our neighborhood and is a good arbiter of the seasons.


We took a friend down to the farm yesterday who hadn't been there for a while and he was astonished to see how much the babies (of all species) had grown. 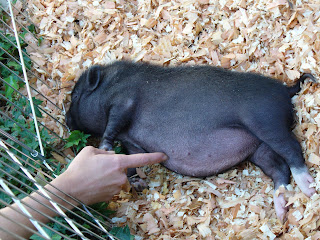 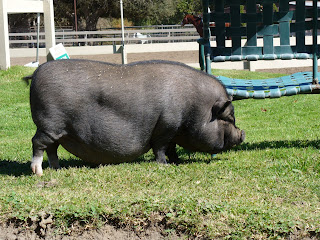 This picture was taken yesterday. She's a very friendly and vocal pig, and she loves smoothies, if you ever come to visit. Seeing this pig with her snout all pink from the fruity goodness in the cup is one of the cutest things you'll ever see. 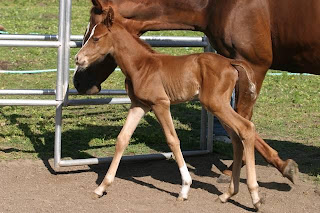 This picture of Ruby (with mama Roxie) was taken the last week of May when she was about a week old. 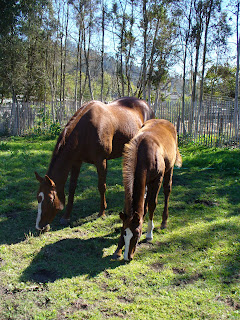 This was taken yesterday. Now that Ruby is bigger the unusual blaze she shares with her mama is even more amazing. She's grown out of that ugly duckling phase and her winter coat is coming in, making her soft and fuzzy again. 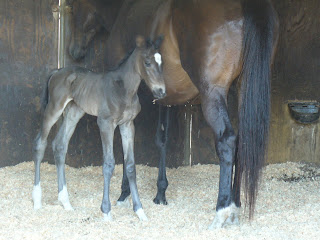 This is Que Sera Sera (Katie) at 1 day old, taken on June 17, she's Missy's niece as her mama Sera is Miss's full sister. 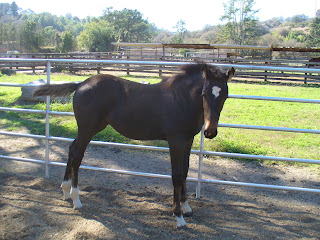 This was also taken yesterday, so she's about 3 1/2 months old. She's a big friendly girl with a lot of personality. What a joy it has been watching these fillies grow, another childhood wish fulfilled.

Damn, now I want a smoothie.

Sometimes, dreams do come true. Welcome to the world, little one.
Posted by Donna at 3:21 PM 1 comment: