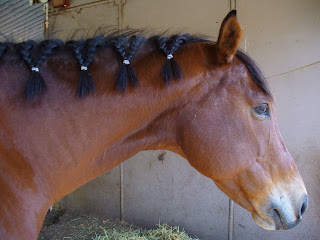 The reason I stopped blogging was because the issues that were consuming me were deeply personal and private and didn't involve just me. Sometimes this public forum just isn't appropriate, as much as writing things down and getting feedback helps. I was able to do that with several people IRL, but the issues continue and I'm far from feeling like any kind of resolution has been reached or that resolution is even possible.

Despite the limbo on one front, I feel compelled to share the trials and triumphs with my beloved Missy. My first ride on her was May 20, 2007, so we've just passed our one year in-saddle anniversary, and I've been riding her exclusively since January. I convinced my trainer that continuing to ride the lazy quarterhorse lesson horses was not a good primer for learning to ride my hot thoroughbred.

Last year we went through a spell where she threw her head around so much it was nearly impossible to ride her, and it turned out that she had to have some dental work done. She has an overbite and some other dental issues and after she healed from the work (including the removal of several wolf teeth) she was much better. A couple of months ago she started the same kind of attitude, only this time it seemed much worse, so after a few weeks of extreme frustration and disappointment my trainer decided we would try a hackamore, which is basically just a bridle without a bit. Within a half hour she was a different horse. It seems counter-intuitive to be riding a hot horse with a hackamore, which is usually considered to have less control that a bridle with a bit, but she doesn't have any bad behaviors, she just wants to go fast. She's learning to wait for my audio and leg cues before moving from one gait to another and usually is pretty good about slowing down and stopping when I ask her. Every time we start out she takes a few minutes to settle down and realize she doesn't need to fight a bit that isn't there, but we have made some amazing progress in the last month and a half.

So much so that my trainer is finally ready to let me ride her on my own! This is huge. Part of the deal I made when I took her was the farm would comp my lessons until I was ready to ride her on my own, so they have a monetary incentive, but my trainer is extremely cautious and would not be doing this unless she felt we were both ready. She is not the easiest horse to ride, I was starting from scratch and she was coming off of a 3 year haitus, so I suppose that in the grand scheme of things one year doesn't seem like such a long time, but to me it seemed like an eternity. Especially since I had to watch other riders, who in my opinion were not as skilled as I was, ride their own horses while I had to be supervised.

I look forward to writing more often and catching up with all my bloggy friends. I haven't been ignoring you as much as just needing a break from the whole blogosphere. I'd love to hear what you've all been up to.
Posted by Donna at 5:18 PM 9 comments:

Thank you to everyone who checked in on me and sent me good thoughts and wishes. I'm still in a place that is dark a lot of the time but I promise I will be back soon, at least with some pictures for you to look at while I figure out how to write again.
Posted by Donna at 7:59 PM 12 comments: