Hard to believe we've already been home for almost a week, I guess that's a good thing, the vacation seemed to go slow and the workweek went quickly. Here is the long-overdue post about our vacation in the West Indies.

The island of St. Lucia sits almost at the bottom of the chain of islands we think of as the Caribbean, third island north of Venezuela, some 1,500 miles south of Miami. It has been independent since 1979, before that it was a British protectorate, but it changed hands 14 times between the British and the French for 150 years. The French named almost everything on the island but it definitely has a British flavor to it. You drive on the left, the British Queen is on the money, all the school children wear uniforms, our resort even served high tea every afternoon. School is taught in English but everyone also speaks Patois, a Creole language. At least 85% of the people at our resort were British, it is heavily marketed to them and Virgin flies direct from London. Surprisingly for a couples-only resort, there were many older couples there, some with their adult children. It was a little strange having an all-white guestlist and an all-black staff, but the staff were amazing, they even put on two variety shows. Between three bars on the property you could get a free drink from 9AM until the "last couple retired". Food was excellent, we ate at our resort exclusively other than the day we drove down to the other end of the island to one of their sister resorts to go snorkeling.

The people are beautiful, especially the young men - dark-skinned, small-waisted, broad-shouldered, washboard abs, either bald or with dreadlocks - you either work in the tourism industry or you do manual labor. As with any third-world country, there is a huge gap between the rich and the poor, with very few in between. Most people live in tin or wooden shacks on small parcels of land, but we never saw any evidence that they weren't making a living and weren't reasonably happy.

As far as the island itself, you run out of superlatives. The water begins at the shore with pure white foam, moving backwards from clear to cerulean to teal to royal to cobalt to navy to indigo at the horizon, the perfect temperature above soft white sand. There are lush jungles and mountains, the roads windy, narrow and for the most part, without lines. I've posted a sample of the over 300 pictures we took, these were all taken at our resort. More to come. 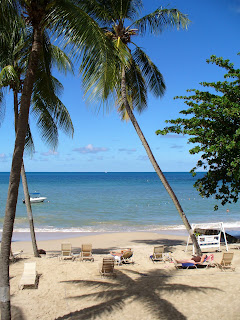 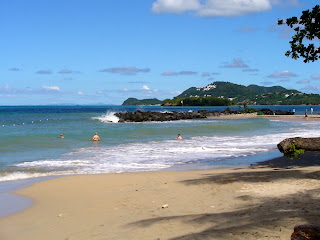 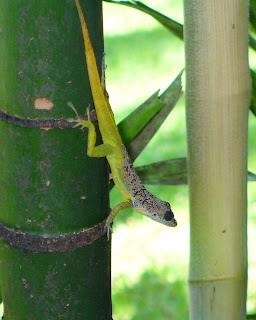 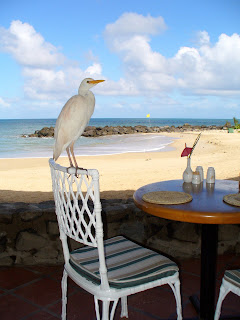 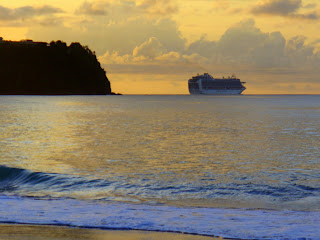