Music In Your Stocking

Inhale. Exhale. That might be the first time in two weeks I’ve been conscious of my breathing. The full force of being a consultant in the financial industry hit me like a Mack truck as clients swung into year-end mode starting in mid-December. I’ve been out at client offices much more than usual, then coming home to work a couple more hours on the clients I didn’t have access to during the day. (It’s extremely bad consultant manners to log onto another client’s computer if you’re on-site, even if you’re on a break.) One of the jobs I’ve been working on was particularly painful and complicated, in fact I did the job twice before they decided on an end-number they liked, resulting in me having to do it a third time. My director at the consulting company I work for actually pulled me out of there early (they refer to this as an "extraction", which made me feel like Sydney Bristow).

Anyhoo, I can breathe now because I’ve met all my obligations for the week and can take the weekend and Christmas Day off! But that’s it. It’s at this point I’m thinking to myself, if I was still an employee of a public company I would have the entire week off. That’s OK, there are always trade-offs and the good far outweighs the bad as far as I’m concerned.

As my gift to you I’ve compiled a list of songs from my Top 21 “new” artists of 2006. These are artists that I first discovered this year, even though some of them have been around for a while.

In alphabetical order with links to song samples:

Knock em Out by Lily Allen, from the album Alright, Still – she reminds me of Pink with a British accent

Ootischenia by The Be Good Tanyas, from the album Hello Love – alternative folk by talented Vancouver ladies

Heaven by Bitter:Sweet, from the album The Mating Game – bossa-nova pop I can’t stop listening to, in the Pink Martini realm

All the Pretty Horses by Calexico, from the album At the Crossroads – A Benefit for Homeless Youth – smoky Tex-Mex jazz-inspired goodness (the link is to their most recent album Garden Ruin, since the Crossroads link doesn’t have song samples)

Sons and Daughters by The Decemberists, from the album The Crane Wife – literary indie storytellers extraordinaire (yes, I know, I’m way behind on getting behind these guys), their earlier stuff is more baroque but this is a good place to start

Your Head’s Too Big by The Ditty Bops, from the album Moon Over the Freeway – I showcased this quirky duet in an earlier post, it’s just different, lots of influences including vaudeville & folk, with a sense of humor I find refreshing

Rue De Lis by The Essex Green, from the album Cannibal Sea – a Brooklyn band who wishes it were British, The Monkees meet The Shins, delightful

When I Was A Young Girl by Feist (Leslie Feist), from the album Let It Die – another Canadian singer with a torch song voice who writes lyrics that get under your skin, especially this song

Bad Idea by Thea Gilmore, from the album Burning Dorothy – a British singer in her mid-20’s with an old soul and an attitude (link is to Avalanche, another album that has song samples, try Juliet (Keep That In Mind))

Goodnight and Go by Imogen Heap, from the album Speak for Yourself – with a strong voice and utilizing layers of multi-tracking, her music is accessible yet introspective

Train by Sonya Kitchell, from the album Words Come Back to Me – she’s 17 with the soul and talent of someone much older, she wrote and plays the guitar on all the tracks, her voice has a natural smoky blues quality

Only A Fool by Marit Larsen, from the album Under the Surface – a Norwegian beauty making her way into the folk/pop space (link is to her myspace page for samples, you can get the album at Amazon)

The Taste of You by Erin McKeown, from the album Grand – I saw her open for The Waifs a while back and I’ve been hooked ever since, I didn't discover her this year but I had to include her, her songs are fresh and winsome, from acoustic country-rock to lush orchestral offerings; I felt her later album We Will Become Like Birds tried to be too commercial, losing some of her uniqueness (no song samples here but you can find lots on iTunes)

Your Belgian Things by The Mountain Goats, from the album We Shall All Be Healed – these guys trick me, some songs I love, like this one, while others make me jump to the iPod to skip the track, you decide for yourself (link is to their newest offering Get Lonely as it has song samples)

The Day the Earth Stole Heaven by Nine Horses, from the album Snow Borne Sorrow – I didn’t have a clue who David Sylvian is, all I know is I heard this song on our houseboat on Lake Shasta and I instantly fell in love with his voice…it’s deep and soulful and sexy (link is to their new album Money For All, coming out next month, for samples)

Needle and Thread by Psapp, from the album The Only Thing I Ever Wanted – they play the Grey’s Anatomy theme song, but worth a deeper listen for their “electro-folk melodies” as Amazon calls it

La Gran Siesta by Gabriel Rios, from the album Ghostboy – utterly irresistible Latin pop, he’s a Puerto Rican Adonis living in Belgium, some songs are in Spanish (like this one), some in English, either way you know exactly what you should do, get up and shake that thang (link is to his personal site, click on Music and Lyrics for samples, you can get the album through Amazon)

Hotel Song by Regina Spektor, from the album Begin to Hope – I had a very hard time picking a song from Regina, there are so many good ones; born in Russia, a classically-trained pianist with a flirty side, her voice is clear as a bell one moment and growly the next, a mix of Tori Amos and Fiona Apple yet better than them both

This Is Where by The Wailin’ Jennys, from the album 40 Days – if the name alone isn’t enough to get you to take a listen I don’t know what will; they’re from Winnipeg, Manitoba (my Mom’s home town!), and darlings of the Canadian folk circuit, with Celtic tinges

Iceskaters by Richard Walters, from the album Pilot Lights – I literally heard this song for the first time yesterday and I fell in love, so I’m still discovering him, an Oxford acoustic musician channeling Elliot Smith with a nod to James Blunt (link is to his personal site for samples)

Chocolate On My Tongue by The Wood Brothers, from the album Ways Not To Lose – sparse modern folk and blues guys, these real brothers have wonderful harmony and a sweet upright bass
As you can see, like a good Scotch, I'm mellowing with age. I have to admit I put on SexyBack when I'm on the eliptical but for the most part I'm looking for deeper than the radio can offer. (Ollie, I apologize, there's probably nothing in this list for you!)
If you want the zip file of ALL these songs, just email me or include your email in the comments. You’re welcome. And have a wonderful holiday.

I'm still here, just incredibly, mind-numbingly busy with work. I have a couple of posts all done in my head but no time to put them down on the computer screen. I even have some music for y'all! I'll get a chance to breathe on Thursday morning, I don't have to be at a client for a software demo until late afternoon.

I never had horse toys when I was a child, I didn't have much for toys period, now that I think about it. My memory is probably playing tricks on me again, choosing only to remember the bad bits, but I was more apt to bury my head in a book than anything else. Anyway, if I DID have horse toys, I certainly wouldn't have anything to do with the monstrosity that is My Little Pony.

Barbie has a horse too, his name is Tawny. *rolling eyes* But at least it isn't creepy. 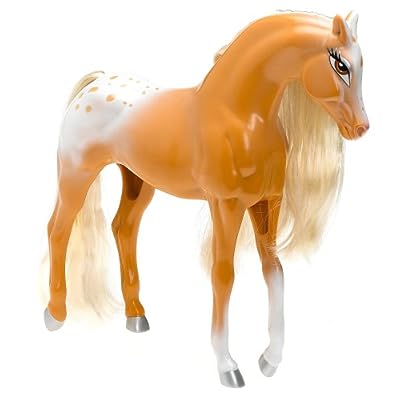 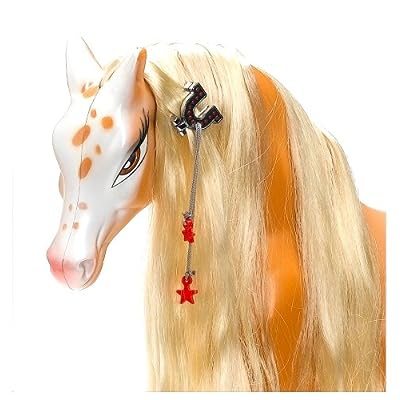 We'll leave creepy for this Bratz rodeo horse. There's something disturbingly come-hither yet evil about that expression, don't you think?


No, I'll stick to my real pony friends, lucky lucky girl that I am. Here I am after my lesson last week with my favorite mare, Angel. 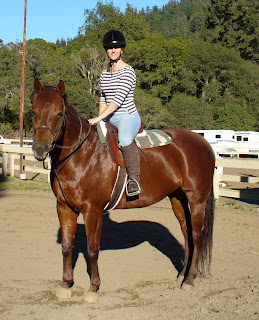 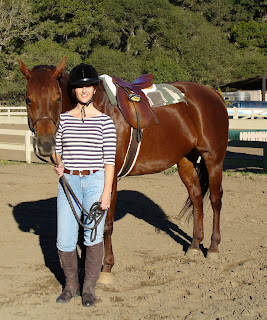 And lest you think I only have love for the trusty steeds, here are some kitty friends too. 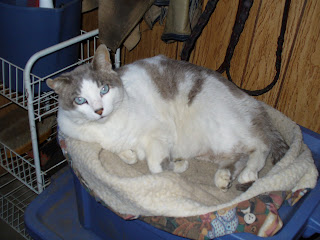 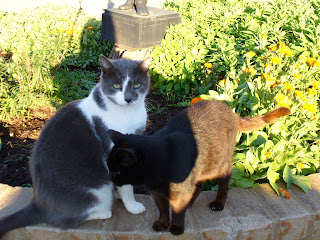 Another Day Older & Deeper in Debt

You load sixteen tons, what do you get
Another day older and deeper in debt
Saint Peter don't you call me 'cause I can't go
I owe my soul to the company store

Yesterday was D's birthday; it also happened to be his company Christmas party. Many companies in the Bay Area, even the large ones, have done away with the all hands holiday party in favor of smaller celebrations, but being a construction company with headquarters out of the Silicon Valley, his tends to favor the old-fashioned approach in many ways. Everybody gets dressed to the nines and we all head to a nice waterfront hotel to eat banquet food and listen to a local cover band. Free drinks and the chance to watch your boss make a fool of himself on the dancefloor: priceless.

Several months ago the pilot light in our furnace started going out intermittently. As the weather got colder the frequency at which I have to re-light it has increased exponentially. With a large sigh we agreed we needed to remedy this situation.

For the price of a good used car or a really good vacation (pushing 5 figures) we are soon to be the proud owners of a new propane furnace, with matching ducts and assorted other accessories.

I’m all for being cozy and all that, but for that kind of money I want something I can show off. Does this count as House Bling? It’s not sexy, it’s not even pretty, and let’s face it, it’s in the basement. It doesn’t even come in designer colors!
Posted by Donna at 9:02 PM 8 comments: