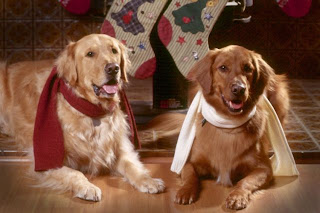 I'm working on a year-end post -- hopefully it will be full of contemplative and revelatory statements, or at least a good helping of snarky, but until then I have wrapping to do and Christmas bark to eat. Please enjoy my favorite picture of our beautiful boys in the meantime, and join me as I raise a glass to toast bloggers everywhere.

Last week, not only did the stars literally align (OK they were planets, but that doesn't sound as good), something else happened that's been 25 years in the making: my husband, his father and his son were all together.

The last time D's father saw his grandson he was under 2 years old, he's 26 now. I won't post their picture because I want to respect their privacy, but believe me when I tell you they all look remarkably alike. It must be strange and wonderful to be able to see what you are going to look like at 50 and at 90 just by glancing across the dinner table. Even though D's father is energetic and is still driving and travelling, his is 88, so it was important that we make this meeting happen and that it be documented in pictures. Of course, me being me, I got a little emotional about the gravity of the moment, but nobody else seemed to be affected by it. D's son seemed a little nervous, but you can't fault him for that, I certainly would be!
Posted by Donna at 6:40 PM 2 comments: 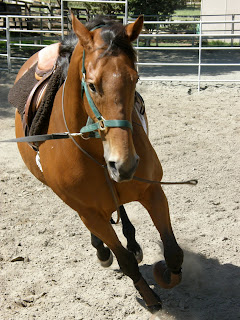 Walk, trot, canter. The three basic gaits. Seems simple enough. Just walk, trot, canter, no big deal.
I had gotten to the point where I was very comfortable cantering on the lesson horses and I loved it. My body moving in sync with the horse, the rush of speed, giving the horse her head and letting the reins steer only. When I started riding Miss exclusively I had to take a giant step backwards and really learn how to trot again. Apparently I was right in my assertion that riding the lesson horses was not teaching me how to ride Miss, as it took some time for us to trust each other and learn each other's cues and idiosyncracies. Lately, despite living in a fog of depression I've been feeling like it was time to take a step forward in the arena, so last weekend I asked my trainer if we could put Miss back on the lunge line at the end of my lesson (when she was tired) so I could canter a few steps. As I suspected, she was a little hesitant, as she had not cantered on Miss for several weeks, but I insisted that she was in a good space and I felt confident enough to at least try. Miss was confused, to say the least: why are we putting the lunge line back on? This is weird. Are you SURE you want me to canter? But after a little prompting she took one giant step and we moved into it. She picked up the correct lead, which she does 98% of the time, but more than that, I could tell she was on the right lead. We only went maybe 4 or 5 strides, but she covered more than one circle with that, she has a huge stride and loves to go fast. She slowed to a walk instantly at my whispered command and we praised her lavishly. Then we did it again the other direction and I was more prepared for the transition this time and felt pretty comfortable. Even though all told it was less than 30 seconds, it was a breakthrough. Both me and my trainer were very proud of both of us. I really needed this. Hopefully we'll do it again today at the end of my lesson. After a year and a half of riding her, we reach the mythical triad.

My trainer didn't really let on when I took her what a difficult horse she is to ride, for anyone, never mind a total beginner. That's probably a good thing, my ignorance allowed me to have more confidence than I would have otherwise. I see other people riding their horses and think, wow, that looks a lot easier than riding Miss, but also, a lot less fun. At the canter she is elegant and high-headed and beautiful. I'm just along for the ride.
Posted by Donna at 10:42 AM 10 comments: